The Beginning of the Biewer Terrier

We are displaying pictures and information that Mrs. Biewer has either given the BTCA, Inc. or to Gayle Pruett, personally. The pictures are real and the documents are real. If you have a question, ask and we will do our best to answer them. We are sharing them so that others in the Biewer Terrier community may get a little glimpse into the lives of Werner and Gertrud Biewer. We would like to state that all pictures and documents are personal property and may not be used without first receiving prior permission.

The Biewers enjoyed traveling in their very “state of the art” camper; since they did not have children, all of their dogs traveled with them on their trips. Mrs. Biewer told Gayle Pruett, “I would get up every morning, brush my dogs’ hair and tie a red ribbon in their ponytail.” Gayle asked her if she ever got tired or if the dogs got mad, she just chuckled and shook her head and said, “Oh, they loved to have their hair brushed, of course, it didn’t take so long then”.

In 1970, while on a camper vacation, they discussed the topic of becoming more involved in raising and showing dogs, so in January of 1973, they sold their home and Hair Salon in Köln and moved to a spacious home in Hunsruck. This move allowed them the much-needed space to raise and breed their Yorkshire Terriers.

The Biewers had been showing their dogs and doing quite well in the show ring. On one of their travels to England, they would visit the Streamglen Kennel, and ended up acquiring dogs to add to their breeding program.

Mrs. Biewer 1968
1968 two of her favorite dogs 1976 Champion Yorkies
1976 Magazine article 1976 Champion Yorkies
second page of article
2 dogs on the beach
1970 Vacation in Spain Mrs. Biewer in 1970
Mrs Biewer ask my opinion of this picture On the beach in 1970
1970 Spain Vacation
1973, they start the year off, aboard a ship to England. In the middle picture she is showing off one of her favorite dog's new hair cut. 1974, they take a different direction and will be vacationing in their "state of the art" camper. Mrs. Biewer is still getting up every morning, brushing their hair and putting a red ribbon in the pony tails. You can see all these photos better in the Photo Gallery.

1973 Show
1973 Dog Show in England 1973 2 dogs
2 dogs in a chair 1974 vacation
1974 Family Vacation
Mrs. Biewer is spending a little play time with the younger Yorkies and showing off her 1974 Champions. 1981 is about the end of the showing career for the standard Yorkshire Terriers. We really don't hear much about any dogs from the Friedheck kennel until 1984 when Shneeflockchen and Schneeman are born and then nothing until their main debut in 1986. In the last picture, taken Nov. 1984, there are surprisingly 18 dogs showing, not counting the dogs behind Mr. Biewer. Do you notice the coloring on half the dogs? A little surprising when Schneeflocken was suppose to be the first black and white Yorkie.

1977 Yorkies
1974 Maybe 10 Yorkies Champion Yorkies
1981 Friedheck Kennel Champions Schneemann puppy
1984 Schneeflockchen Schneemann
1980 Winter slopes
1980 Beautiful German Winter 1986 The start of something big
1986 There are 59 dogs on the run 1884 puppies and 2 biewers
March 1984 2 older Biewers??
1984 - 1986. We find very few pictures, where the babies are actually with their moms. These babies do not even have their eyes open and there is no mention of who they belong to. The last picture, they have their eyes open, but this is a whole new bunch of puppies

Schneeflockchen puppy
1984 more Biewer babies
Never found the mom Biewer Babies
Lots of babies, no mamas
The basket of babies on the end was taken in March 1985, and they appear to be about 6 to 8 weeks old. We do not know who the parents are of any of the puppies or why they are not with their moms. Mrs. Biewer said the standard size of her litters was 3. Where did the Biewers come from? Schneeflockchen was sold to the singer Margot Eskens and is only a year old.

big babies
1984, but not Schneeflockchen Biewer Babies
More babies Babies March 1985
Babies in the nursery
The red baskets are the nursery baskets. Mrs. Biewer wrote on the back of the one picture as though the dogs were talking. It says; "We are in line like cars, even if mom and dad aren't around. We have it so good, we don't have to do much, everything is provided. Do you notice the docked tails?

2 biewer babies
Babies 1 biewer
1984 Older babies
Mrs. Biewer walking the babies
In the last picture, Mrs. Biewer has written on the back what the dogs are saying. This is what they are telling you: It says; March 13, 1986 "We were brushed everyday. It is crazy but a lot of fun. We would have a lot of tangled hair if we didn't have it done. Only the fence is holding us together". Then Mrs. Biewer says, " if I were reborn, I would do it all over again". Do you see any Biewer's in there? Mrs. Biewer never shaved her dogs down unless she had good a reason. If there was ever an oops litter in the Friedheck kennel, that does not mean it was duplicated.

Biewer and Black dog
The baby sitter with a Biewer This picture is being removed, due to the misinterpretations of the general public. It was not our intent to imply that the Biewer breeding program was built on Tibetan Terriers and are sorry that assumption was made. It was one dog picture among many. 1986 big grouop og dogs
1986, about 50 dogs, coloring?
The dogs with Mrs. Biewer are Schneeflocke, Schneewittchen, and Schneeprinz II, she couldn't remember the other ones.

Margot Eskens at the piano
Margot loved her girl Margot and Sam
Margot always has her dog Mr and Mrs Biewer
1989
The Flyer that the Biewers passed out to everybody was a picture of Schneeflockchen and Schneeman, both dogs that were acquired by the singer Margot Mucnchow-Eskens. We have posted just the writing section so that you can see who the owners are.

Flyer
Flyer that the Biewers passed out Flyer description
Besitzerin: means Owner Margot and husband Karl
Margot and Husband
In this newspaper article, Margot Eskens says, He is her companion and that he will be with her forever and always. Margot Eskens sent Mrs. Biewer a picture, Mrs. Biewer then wrote that she was the godmother of the name "a la Pom Pon" on the picture.

Margot with her Schneeflockchen
Margot Munchow-Eskens Margot Eskens
Schneeflockchen Picture of Schneeflockchen
Picture Margot sent to Mrs. Biewer
Mrs. Biewer's dogs were almost always gold headed. Very rarely did they have the tri color faces as was stated in the standard. This is something they were striving for, yet would not be accomplished during the short time they had to develop the breed. They always docked the tails. SiSi was the last dog born in the Friedheck Kennel and her tail was docked. Mrs. Biewer never left the tail on a dog as it was an old habit that was going to be hard to break. 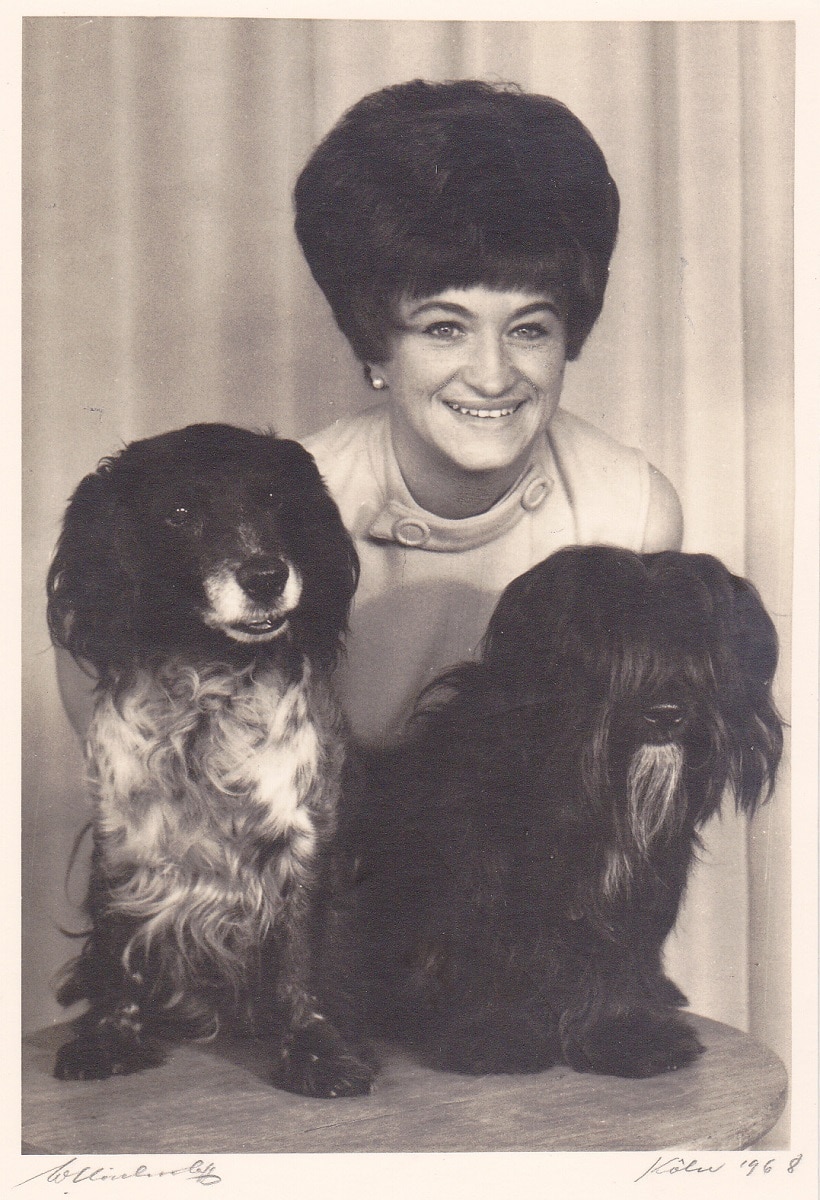 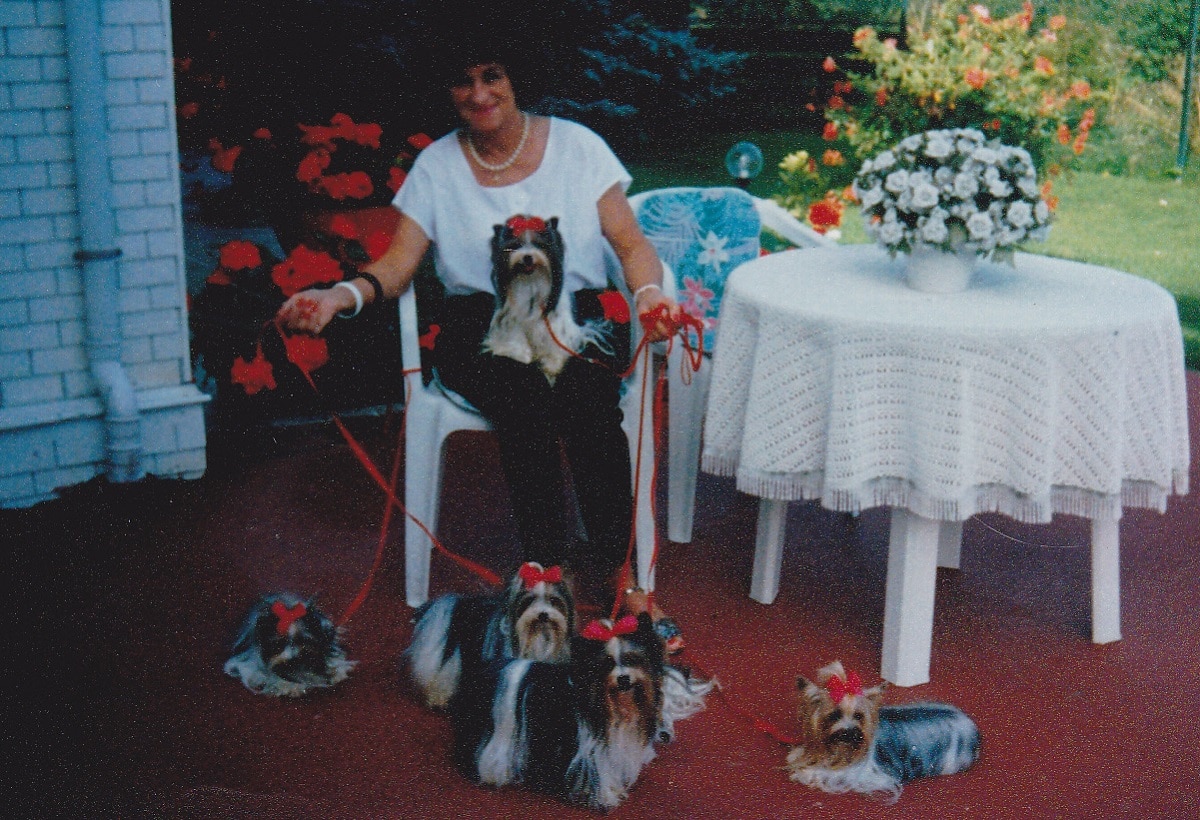