We owe Dr. Paul Jones of Mars Veterinary a huge debt of gratitude for hearing our concerns about the Biewer Terrier and agreeing that it was indeed a breed of its own and not a purebred Yorkshire Terrier. As we told him the story that came with the dogs from Germany, he agreed to help us find the truth. We spent many months talking with him as he dug deep into the genetic make-up of every line that came out of Germany.

Introduction to previous work:
The Biewer Terrier analysis performed so far has encompassed a variety of approaches. The most simple of these used principle component analysis (PCA) to demonstrate that the Biewer Terriers can be clearly distinguished from Yorkshire Terriers using the Wisdom panel MX test SNP data alone, signifying that these dogs have genetic differences and cluster separately from the Yorkshire terriers in the Mars Veterinary database (see Figures 1-3). 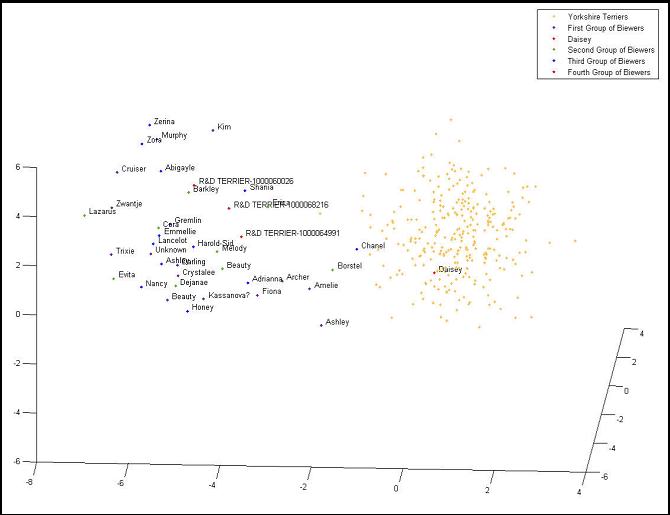 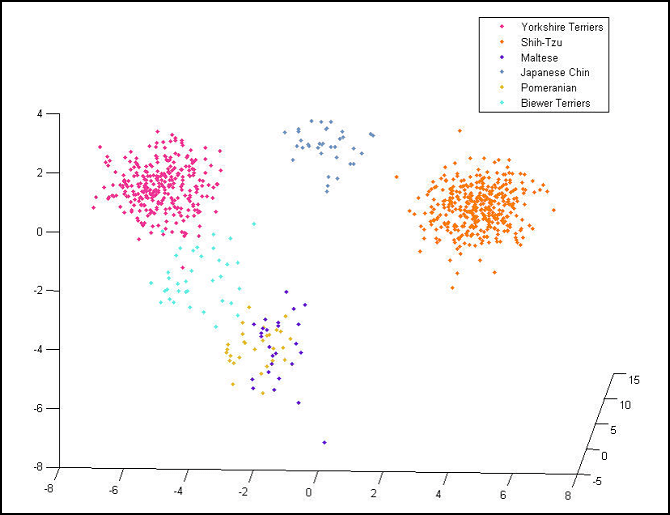 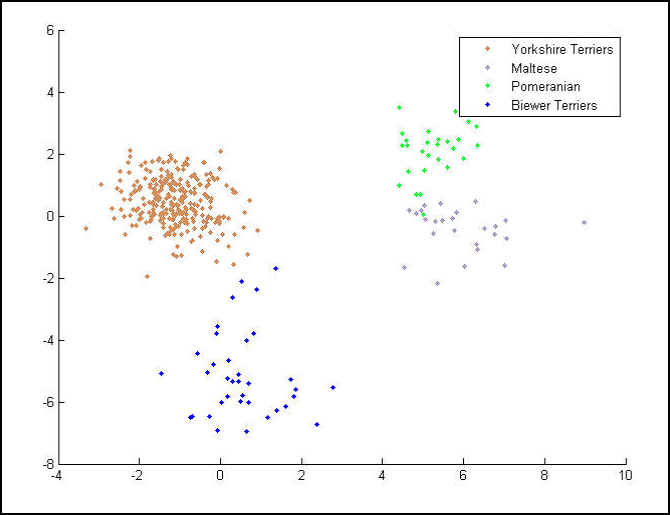 This document details the other analysis methods that have been used to study the Biewer Terriers in more detail to understand exactly how this breed differs at the genome level from other breeds. The methods employed have included allele frequency analysis and haplotype analysis, including the modeling of mutation and crossover events. We also used PCA analysis on individual chromosomes and with even numbers of breeds.

To start with, the calculated distance from breeds in the Mars Veterinary database to the average allele frequencies of the Biewer Terrier was compared to find the breeds which were closest to the Biewer Terrier (data not shown due to size and complexity of spreadsheet). These distances were sorted to find the closest breeds on each of the 25 Chromosomes studied. The most closely related breed at each chromosome was generally the Yorkshire Terrier, though some other breeds were closest to the observed Biewer Terrier average allele frequencies in some places. This served as a quick way to simplify the remaining analysis by allowing the concentration of further efforts on specific genomic areas, and run more detailed analysis on less breeds, meaning we could run programs which take a long amount of time, such as PHASE. Nine breeds were selected from the initial comparison of allele frequencies for further detailed analysis and comparison of observed genetic data: Biewer Terriers, Yorkshire Terriers, Silky Terriers, Papillon, Pomeranian, Havanese, Parson Russell Terrier, Bichon Frise, and Maltese.

We performed quality control on the genetic SNP data for individual dogs in our database from the 9 selected breeds, removing SNPs which had observed levels of more than 5% missing data at the locus. We also removed samples which had more than 5% missing data, leaving 162 SNPs for further analysis. This was required because there was some variability in the call success rates of particular SNPs with the different historical analysis methodologies used to generate the SNP data, and also in the DNA quality of samples between different genotyping batches. We attempted to use Phase analysis (see below) to imply the missing data but when we attempted analyzing the Biewer Terrier haplotypes for Yorkshire Terrier haplotypes, they did not exist on Chromosome 20. This was due to missing data near the start of our window of SNPs on this chromosome. Removing just four missing SNPs in this location and repeating phase analysis revealed the presence of Yorkshire Terrier. The other quality controls increased the proportion but at the loss of moving the haplotypes away from the start of this window.

Phase uses analysis of SNPs to predict the sequence on the chromosome inherited from each parent. We can use this method to deduce unique sequence haplotypes within a breed population and predict that if other breeds share these haplotypes it is more likely that they share similar chromosomes and a common ancestor.

Haplotype changes reflect how the chromosome changes through generations, the two main disruptive effects are mutation and crossover. Mutation usually alters a single SNP variant within the haplotype and is usually a rare event, and crossover is where the two chromosomes are combined and separated to become a mixture of two ancestor chromosomes. Chromosomal crossover is a common mutational event because it happens during every round of germline sperm and egg cell production by a process called meiosis. Both these types of changes increase the diversity within a breed, though these effects make it more difficult for us to find this new sequence within a different breed.

Using this knowledge of genetics, there were three types of analysis we looked at regarding the haplotypes imputed by phase. The first was looking at which breed populations shared haplotypes with the Biewer Terrier. To find potential shared ancestry hidden by haplotype changes, we also looked at the likelihood that a Biewer Terrier haplotype could be formed from either the mutation of a haplotype in a separate breed, or alternatively from a single chromosomal crossover event.

Crossover may be analyzed by creating a list of potential crossovers out of the haplotypes of a population (breed) and counting how many of these may be generated for each haplotype being considered for a chromosome. This gives a likelihood of how easy it is to make this haplotype out of a given population.

For breed populations with large amounts of possible haplotypes, such as Yorkshire Terrier, these numbers were generally small. This suggests that this metric may not be directly compared between breeds. If this is the case, a Boolean approach may be more useful.

Mutation was analyzed in a similar manner to Crossover but by creating a list of potential mutations instead of potential crossovers. 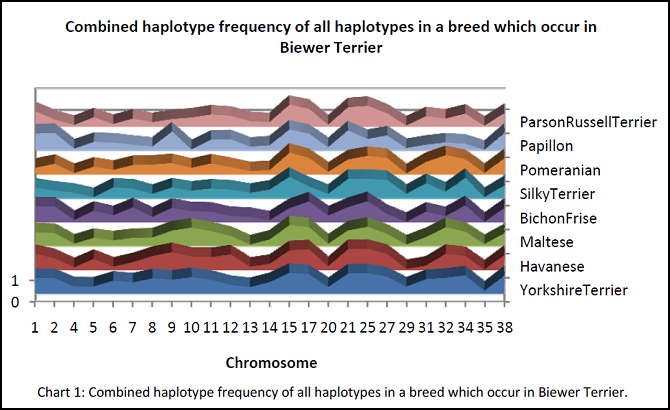 CHART 1: The overlap of observed haplotype sharing between the other tested breeds and the Biewer Terrier varied quite a lot between chromosomes, as can be seen in Chart 1. There are a large amount of shared haplotypes on Chromosomes 15 and 1, Chromosome 15 is known to harbor the IGF1 gene that is an important determinant of canine size and it is likely that chromosome 1 shares an additional size influencing gene. Chromosome 20 appears to stand out as an enigmatic mystery, with a very small quantity of haplotypes shared with Biewer Terrier from other breeds. If we look at the sum of the combination of haplotype frequencies for each breed, we get a distinct increase in Yorkshire Terrier, and a slightly smaller amount spread across Bichon family type breeds: Havanese, Maltese, and Bichon Frise, as if there were some relevant relative of the three which was not in the analysis. 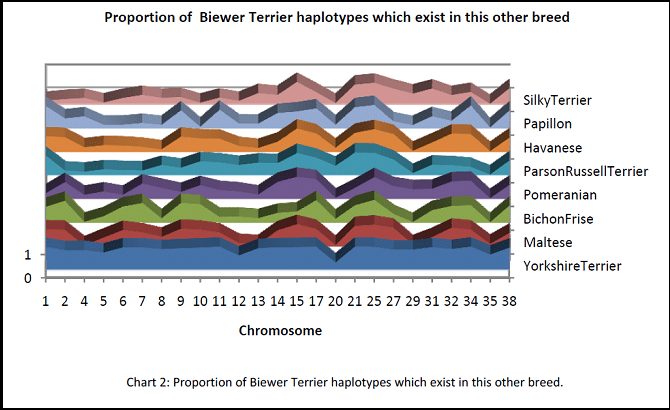 CHART 2: This chart shows the proportion of Biewer Terrier haplotypes which can be explained by their observed presence of another breed. It clearly shows how haplotypes that are observed to occur in Yorkshire Terrier could account for a large quantity of the haplotypes which occur in Biewer Terriers. This is perhaps not surprising given the observed physical and genetic similarity of these breeds. Again – chromosome 20 stands out as an obvious exception. 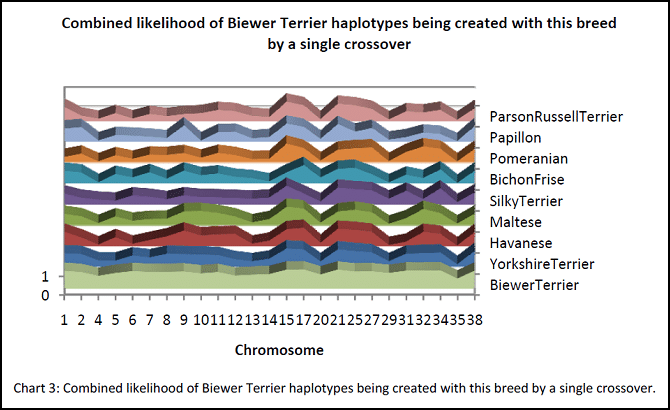 CHART 3: This chart shows the combined likelihood of the Biewer Terrier observed haplotypes being created by a single crossover mutation of haplotypes from the other breeds. This has a lower likelihood in Biewer Terrier for some chromosomes which suggests that these haplotypes may have been created by mutation or directly from other breeds. Chromosome 35 is a good candidate of this, though this chromosome has a larger amount of diversity than the other chromosomes, making this a difficult region to derive accurate lineage information for. There is also a large influence from Bichon family type breeds such as the Bichon Frise, Maltese and Havanese. 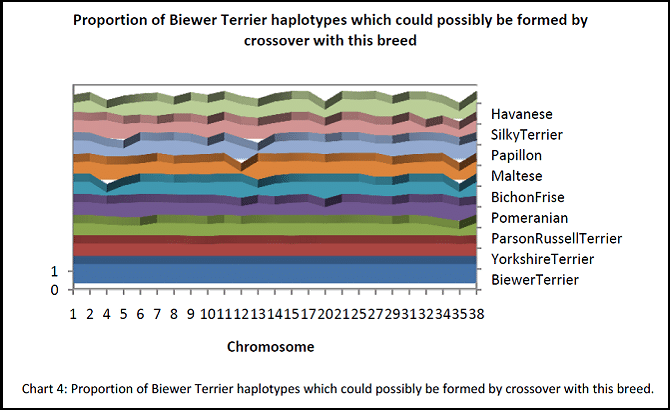 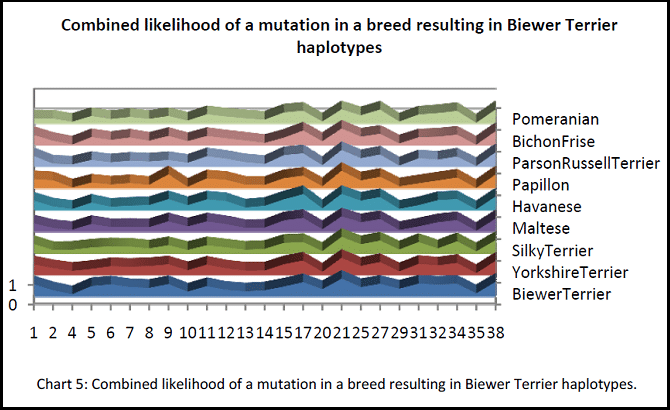 CHART 5: This chart looks at the combined likelihood of an SNP mutation resulting in Biewer Terrier haplotypes. The observed pattern is similar between most of the breeds. 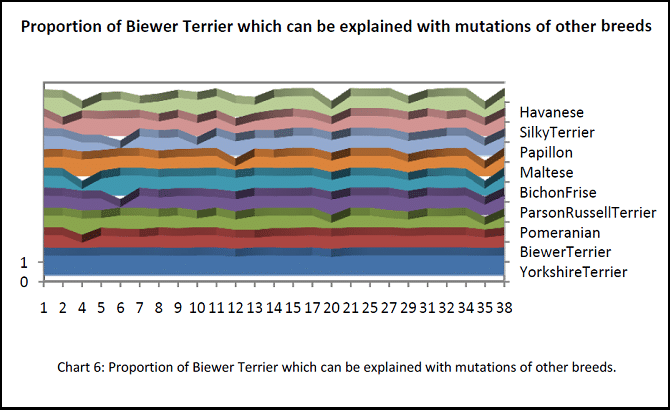 To summarize the data presented so far, we have detected a strong Yorkshire Terrier influence on all chromosomes except chromosome 20. We now address the Chromosome 20 enigma with further analysis of this Chromosome. 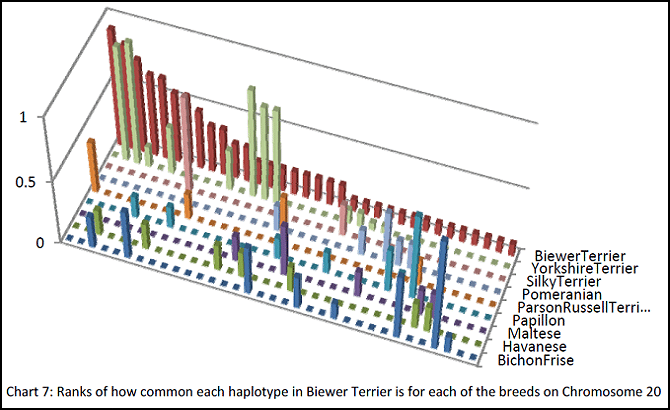 Looking further into this region for any relevance to the Biewer Terrier we found a gene which is possibly the most relevant to the Biewer Terrier’s characteristic coat and pattern named MITF. MITF is a gene which has been associated with regulating white patterning in dogs, and in essence says where the dog will have pigmented cells that produce any coat color. The absence of this gene product in cells makes regions of a dog’s coat white.

The location of this gene is within the start of the first few SNPs the Wisdom Panel database uses on Chromosome 20, which was one of the regions where we removed SNPs for the previous experiments due to stringent quality control measures.

To investigate this region more fully, we focused on the investigation of haplotypes from samples which had no missing information for the first 6 SNPs of Chromosome 20. The count of the samples analyzed for these SNPs are shown in table 1. The haplotype frequencies of these haplotypes determined by Phase using these 6 SNPs are shown in Chart 8. 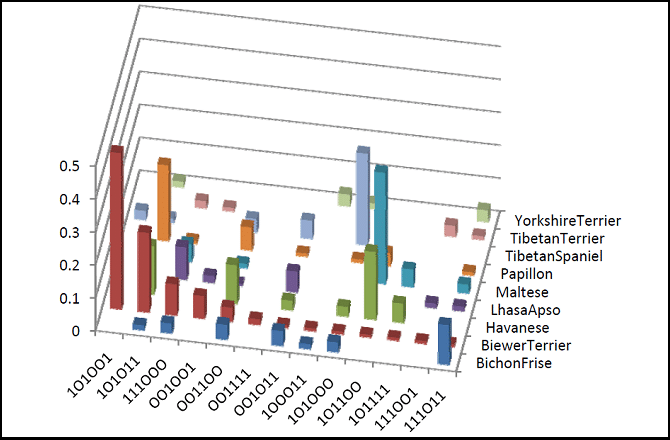 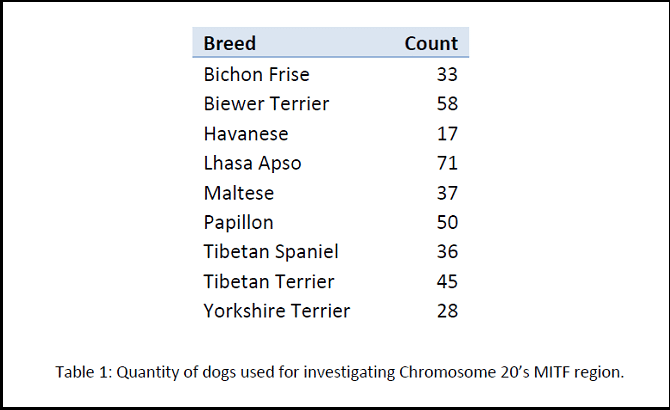 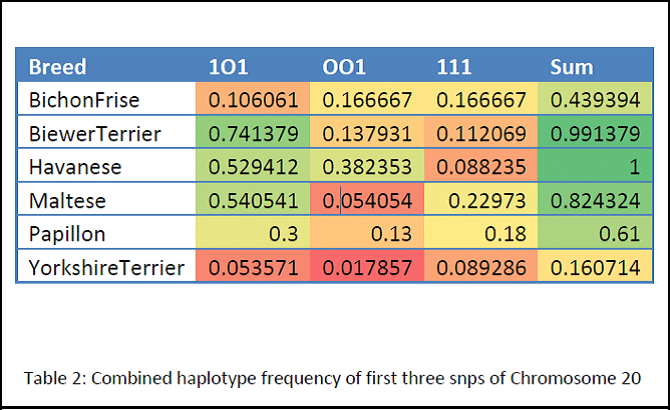 Further PCA analysis: Principle component analysis was run in Matlab on the chromosome 20 data set (which had the average allele frequencies for the SNP substituted for any missing SNP data). This resulted in the plot shown in Chart 9. 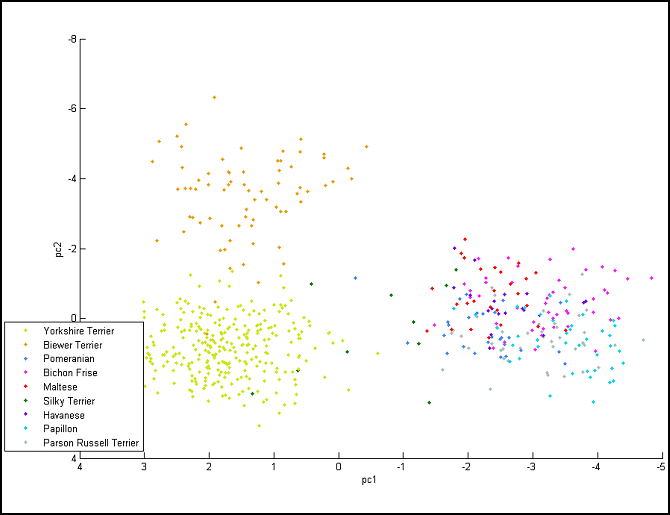 CHART 9: This treats Yorkshire Terrier and Biewer as distinct breeds, yet merges all the other breeds. This is due to the analysis using a disparate amount of samples.

If we equalize the number of samples given to each breed by selecting ten samples for each breed at random, we get the plot in chart 10. 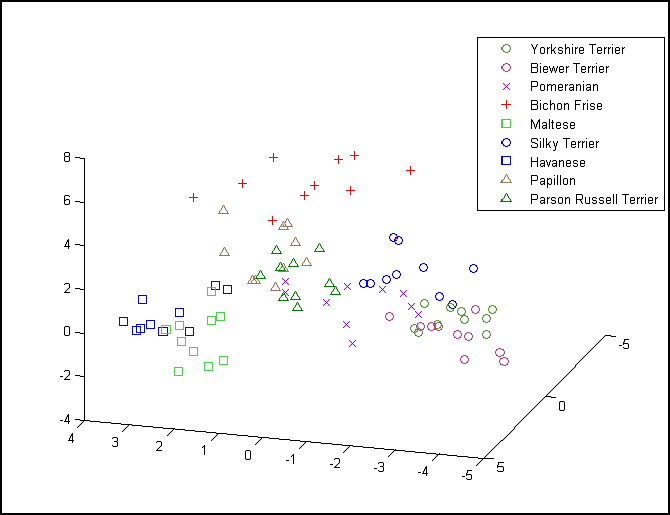 CHART 10: In this case, there are three clusters of breeds. There is a Maltese / Havanese cluster, a Papillon / Parson Russell Terrier cluster, and a Biewer terrier / Yorkshire Terrier / Silky Terrier cluster. The Biewer Terrier is quite far away from the potential Havanese influence on this plot, though it clusters quite closely to the Yorkshire Terrier. This could possibly be a further disparate number of samples effect due to the Silky Terrier adding to the Yorkshire Terrier influence, or the inclusion of the sole Asian breed, the Pomeranian.

Conclusions:
Biewer Terriers share the majority of their haplotypes with Yorkshire Terriers.
Chromosome 20 is a less perfect match to Yorkshire Terrier. The region where these two breeds are most different on Chromosome 20 is around the MITF region, which is known to be related to white coat patterning. The closest breed at this location that we have data for is the Havanese, though the other Bichon Frise family breeds are relatively close as well.

Information on the MITF region:
We have looked at a recent paper on MITF in dogs, and it highlights two relevant genetic variants that are related to different forms of white coat patterning. The first is a SINE insertion, and the second is a length polymorphism.

We could also potentially sequence the length polymorphism. This would give us data on a short sequence of DNA which is unique between white spotted and nonspotted dogs. We should be able to tell if it is more likely that the Biewer Terrier copy of this sequence is genetically closest to Yorkshire Terrier, or an alternate breed if data on enough breeds in this region were determined. This is potentially a challenging task, as this length polymorphism contains a form of sequence which is typically problematic for sequence analysis.

As of date, both experiments we have attempted to look at these variants in the laboratory have failed, though trying different primers and experiments could potentially resolve the current issues.