Biewer Terriers are a "single" coated breed, meaning that they should not have an undercoat. Their coat is very similar to human hair but, we suggest NOT using people shampoo as Doggies have a different ph than humans. Using people shampoo can result in dry, itchy, flaking, and sometimes allergic reactions in their skin. If you do desire to use a people shampoo, please make sure that it is of good quality and a low ph balance. Remember to completely rinse the hair after shampooing and conditioning. It is best to always brush the Biewer that has been sprayed with a light mixture of conditioner and water. Never brush a Biewer Terrier when it is completely dry due to this will damage the coat.

The Biewer Terrier is a breed that most owners can easily groom themselves if they so desire. Here are some basic grooming needs and simple tips.

Remember that this is a breed that requires frequent bathing and daily brushing. If your dog gets dirty then bathing once a week will help keep them nice and clean. The exception is the underside of the body where urine collects on a male. Wash this area daily with a damp cloth, a drop of shampoo or conditioner, and warm water.

There are a number of really good dog/puppy shampoos on the market from which to choose. Remember to be careful around the eyes. Use a tearless shampoo for the head and around the eyes so you don't have to worry about getting soap in them. NOTE: Puppies are fairly wiggly in the sink and slippery when wet! Make sure you have a good hold on them and have all your bathing necessities and towel right at hand. NEVER LEAVE YOUR DOG/PUPPY UNATTENDED ON A COUNTER OR TABLE...THEY WILL WALK OR JUMP OFF BEFORE YOU CAN BLINK AN EYE...GUARANTEED! This can result in a broken leg or worse.

Again there are a number of good dog/puppy conditioners. Any of the premium conditioners will also work.

Wetting tangles with warm water, a little conditioner and working them out with your fingers as you bathe the dog should help. You may also use this method with a metal comb as you work out the tangle carefully. Sometimes, a bit of hair oil also helps...

A good pin brush with rubber back is an excellent grooming aid also because the pins are longer to reach through the coat. Do not use a brush with small balls on the end of the pins as these tend to pull the coat and break it.

A good metal comb with long teeth is the best. They can be a bit expensive but you won't find any rough spots to tear your dog's coat. Remember to ALWAYS finish your grooming by combing through the coat. You will be surprised at the tangles and knots you missed with the brush. DO NOT ALLOW TANGLES OR MATS TO REMAIN IN YOUR DOG'S COAT... Mats tighten with each passing day and can be very painful to remove. Removing painful mats is not fun for your doggy or you.

When using the hairdryer to dry your dog, PLEASE REMEMBER TO WATCH THE HEAT!!! Remember that their skin is very tender and you can easily burn them. There is a hands free portable dryer available that has a stand so you are able to have both hands free to groom your dog as they dry. Keep a towel or rubber mat under them so they'll have good solid footage and won't slip and hurt themselves.

The only trimming that needs special attention is under the pads of their feet to remove the hair, on the top 1/3 of the ears, and around the rectum. If you leave the hair on the ears and never trim them, then possibly the weight of the hair will cause the ears to droop. Cleaning the hair around the rectum will help with their bottom's cleanliness.

Teeth should be cleaned on a regular basis and started at a young age so they become used to the handling. Ask your vet to recommend the best product and method for your dog. Your vet can also show you how to brush the teeth.

Biewer Terrier ears should stand erect as young puppies. To keep them erect they must be trimmed every few weeks. By beginning about 1/3 of the way down from the top of the ear, carefully snip or shave, with a Trimmer Finisher, the hair from the inner and outer ear surfaces. When all the long hair has been snipped away, the edges of the ear may be trimmed/shaved being extremely careful not to cut into the ear leather. This is best done under bright light, the contour of the ear is followed and any stray hair is then snipped away.

Looking for a Layered Head Cut?

Jonathan David will teach us how to get a layered round head using his Kenchii shears. Jonathan is an excellent teacher and we encourage you, given the opportunity, to attend one of his seminars personally. If that is not possible we hope you will enjoy this educational video and be on your way to creating that perfect hair cut. 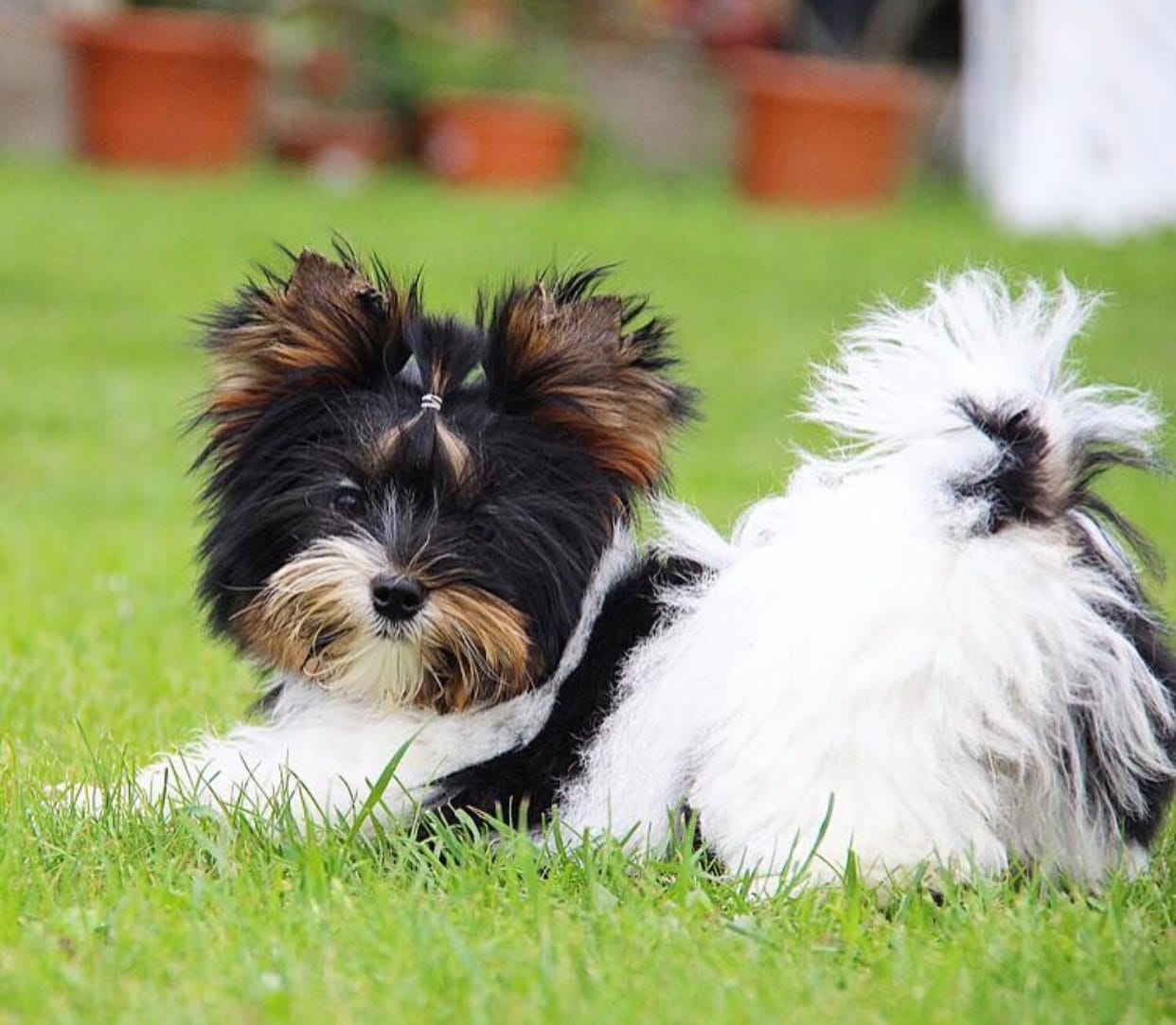 The ear taping method called “Party Hat” was coined by my daughter in 2006. During that time we were picking up our first Biewer Terrier from the breeder. Upon arrival, my daughter looked in the window from the front porch and squealed, mom, look, they are wearing little party hats. When we went inside what we were actually looking at was masking tape, in different colors, holding up the puppy's ears. From this moment forward, I refer to this method of ear taping as the “party hat” method.

The floppy ear lies tight against the head and should be given early attention as the cartilage has not yet strengthened enough to start the process of lifting the ear. I would start the Party Hat with this ear around 6 to 8 weeks and may have to use it on the droopy ear.

The droopy ear is halfway up and in most cases I have found that it will eventually stand on its own if given enough time and care. The hair must be shaved halfway off the back of the ear and inside the front, along with trimming the edges with scissors.

Clean the inside of the ears with a good ear wash solution and make sure the ear is thoroughly dry before applying the masking tape. I purchase the 1 inch 3M masking tape. I find this product peels off easier. It supplies enough support to the ear along with enough airflow to the exposed tip of the ears.

Cut a 12-inch strip of masking tape. Starting at the back of the ear, press the left ear flush against the tape ensuring there are no bends in the ear. Stretch the tape across to the right ear, and press the ear against the tape, again ensuring it lies flat on the tape with no bends.

Fold the tape to the front of the ears repeating the same process and overlap the tape from where you started with the left ear. Trim off excess tape. Pictures 3 and 4 are taped ears depicting the Party Hat look. After the 3rd day, remove the tape. If you use a syringe and squirt a little alcohol in between the tape and ear, the tape will come off with great ease.

Looking from the front, take your scissors and cut the tape in half between the ears. Keeping the scissor blade flat, slide it under the tape in the front of the ear and cut the tape in half. Repeat this process in the back of the ear. Repeat on the other ear. Carefully peel the tape away from the ears.
If the tape does not peel off easily, grease your fingers with some baby oil and rub it on the ears and tape as you slowly remove the rest of the tape. After one week, if the ears do not stand on their own, repeat the process. You have a window of about 8 months to get those ears to stand! Patience is a virtue.