The Heritage of the Biewer Terrier has been an interesting and much-discussed topic over the years. Mr. and Mrs. Biewer had been raising and showing Yorkies, when on the morning of January 20th, 1984; Mrs. Biewer assisted their little "Fru Fru" in presenting them with a blue, white, and gold puppy. They named this tiny beauty, Schneeflockchen von Friedheck, and her birth marked the beginning of what is now known as the Biewer Terrier breed. 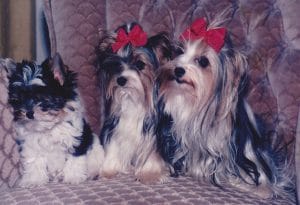 The Biewers spent many years in seclusion, trying to perfect the look they had envisioned for this enchanting little dog. Mrs. Biewer with the help of her husband passionately continued in the development of this new and exciting breed. During this time they set out to find a registry that would accept them as a breed of their own, and in 1988 discovered the Internamtionaler Allgemeiner Club der Hundefreunde (ACH).

The demand for these exclusive dogs was hard to meet, as the Biewer's did not produce many Biewer type dogs and they were very selective where their dogs were placed. Many breeders tried to replicate the "Biewer Dog" by mixing other breeds together. It wasn't long before Mr. Biewer became ill and was unable to help Mrs. Biewer carry on the dream they had set out to accomplish for the Biewer Breed. Sadly, Mrs. Biewer phased out their breeding program in order to better care for her husband during his illness. Fortunately for dog fanciers, this was not to be the end of the Biewer Breed.

The Biewer Terrier was introduced into mainstream America in 2003, at which time there were only a handful of breeders, both in Germany and America alike. Being that the story regarding the development of the Biewer, did not match the dogs coming in from Germany, Gayle Pruett and Myrna Torres contacted Mars Veterinary to see if they could help them determine if the Biewer Terrier was a Yorkshire Terrier or if it was a purebred due to the introduction of other breeds. In September of 2007 Mars veterinary said they were ready to release their tests and it would cover all the breeds suspected to have been used in the development of the Biewer. Myrna made an appointment with her Vet. and the first 10 samples were submitted.

Mars Veterinary would be as surprised as we were when they reviewed the results of the 10 blood samples submitted by Myrna Torres. These samples had all clustered together, which is characteristic of purebred results, and so began the process that would prove and establish the Biewer Terrier as a purebred dog. This is the first time in the history of dog breeding, that a dog has been proven to be a "purebred" using the tools science has to offer. The Biewer Terrier was established as a purebred dog, using science, through the collection of genetic data, instead of the customary pedigree documentation. 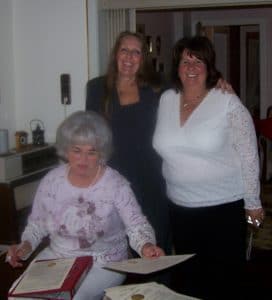 Gayle Pruett and Deb Sidle went to Germany later that year to meet with Mrs. Biewer personally. It was such an exciting time as Gayle shared information about the Biewer's in America and Mrs. Biewer shared information about the trials of their breeding program. Mrs. Biewer was so happy to learn that the Biewer's were flourishing in America, that she wanted to be a part of the development of the Biewer Terrier. We asked her if she would like to be a member of the club and help us avoid any problems they may have already encountered. This made her very happy and she graciously accepted our offer.

Mrs. Biewer became a member of the BTCA, Inc. in 2007, in order to assist the breeders with their breeding programs. She was excited about her position in the club and said she did not take it lightly. She was proud of what we were doing in America and hoped that everyone would work together for the betterment of the breed. Mrs. Biewer said, "I am happy that the standard has now been described. Please take note that you have a dog that carries my last name; I take the right to determine to what guidelines the Biewer is guided." Mrs. Biewer signed the standard for the Biewer Terrier at that time.